Every design sources always have interesting stories behind it. These tools and source creation show the passion and dreams that the designers have in designing. It also shows the work ethic of these designers when they are creating a piece of art, which also needs an appreciation.

We often talk about art and design inspiration. This time, this article will take you on a journey that inspires creating some of the best illustration tools. Here are the stories as told by the shop owners about some of the most popular tools crafted by creative-minded people. 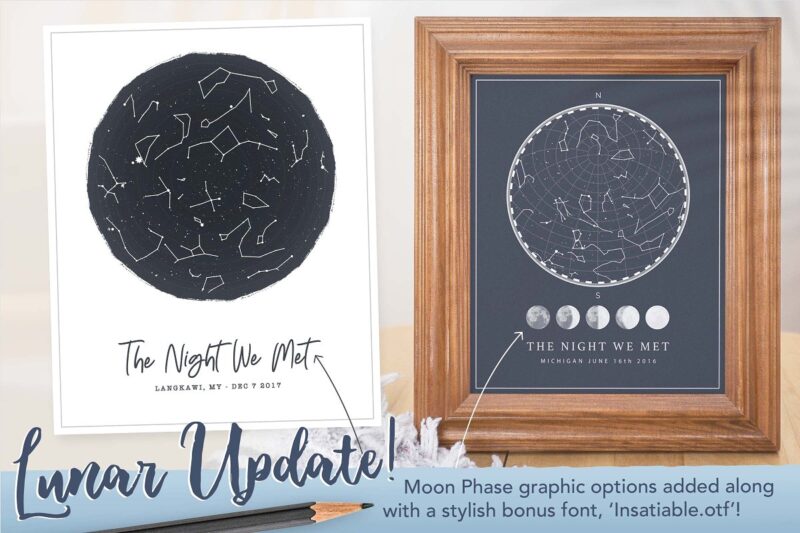 If you are interested in star constellation themes, you will love the night sky-themed template created by Drifter Studio. This jaw-dropping art was created by designer Calvin Drew who loves browsing for inspiration from Instagram and Pinterest. His love of looking at stunning images prompted him to create powerful tools that can help people create breath-taking artworks on those two social media platforms.

Calvin Drew was inspired by artists whose artwork he loved and tried to imagine what tools they used that allowed them to produce such great artwork. He knows that many artists and designers do not like the workflow that takes too many hours. Therefore, he thought of what he can do to shorten the workflow without sacrificing the results. Most of the time, it turns out that a simple tool can do a lot of work more than a complex tool. 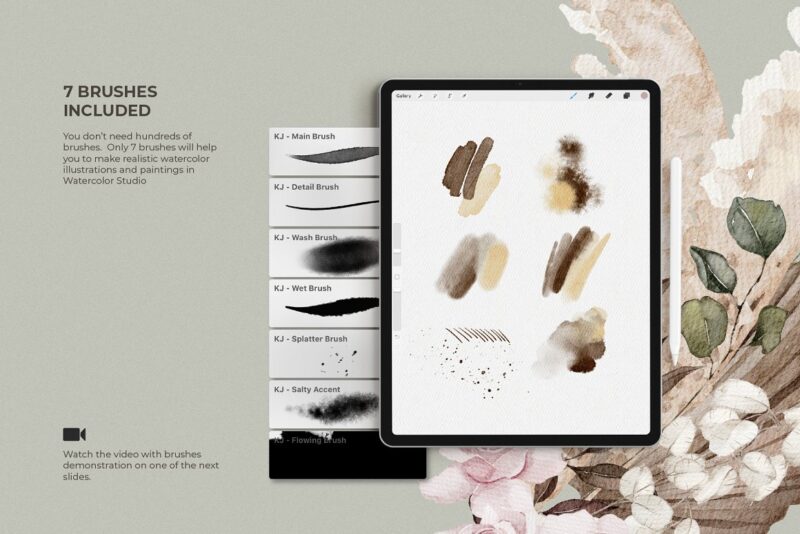 We know how technology continuously and rapidly evolved in the last few years. Designing tools are increasingly sophisticated and compact, so designers do not have to use too many tools when designing their artwork. Katsia Jazwinska, for example, can accomplish a lot more with minimum tools, which in her case was the iPad Pro.

The first time she got her iPad Pro with an Apple Pencil, he thought it was one of the best inventions. She can save a lot of paper and other drawing and painting materials. In the past, people will need many tools to bring out every time she paints outdoors. However, with the iPad and the Realistic Watercolor Studio dor Procreate, she only needs to bring her iPad and the Apple Pencil.

With her love of the easiness and flexibility of designing using a tablet, Katsia comes up with a Procreate kit to solve issues commonly found in digital watercolors. Many watercolor apps have custom brushes which, albeit useful, can be difficult to use or have unrealistic effects. Therefore, Katsia understood that she should create a very realistic watercolor texture with a few easy brushes. 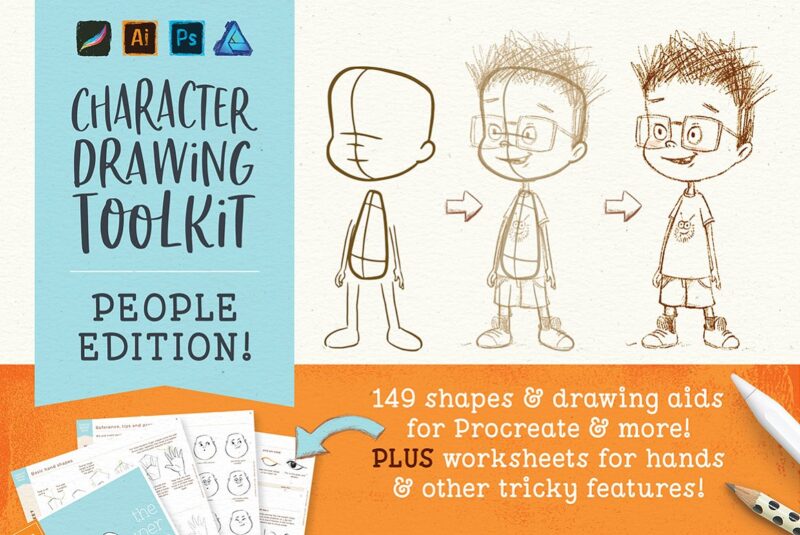 Drawing requires skill and a lot of practice. However, people who are new to this field and want to learn drawing are often don’t know where or how to start. That is one of the toughest challenges for beginners. Realizing this challenge, Lisa Glanz came up with the Character Drawing Toolkit.

Lisa’s passion was creating a design source that can be genuinely helpful yet easy and fun to use. She wanted to find ways that can save time and help people in their creative process. That is one of the reasons why her design sources were mostly created to solve certain pain points that people have in designing.

The toolkit was created to help people draw better characters and encourage their style development. That is why the kit contains individual shapes that are versatile and ready to use so that users can use their imagination to build their characters.

With the continuous development of technology, more and more products and workflows move into the digital version. While it comes with many benefits and flexibility, digitalization also causes a longing for a realistic touch in design resources.

Sadie Lewandowski was inspired by how real pencil feels on paper and its texture when creating the Pencil Pack for Procreate. A pencil has a certain charm, and authentic feel that you cannot find in digital tools. Moreover, it doesn’t create the characteristics that the traditional pencil has, so it is relatively easy to differentiate artworks created using traditional pencil and one created digitally.

The Pencil Pack tool was created to blur the lines of digital and traditional hand-drawn artworks. It led Sadie to draw on real paper with her favorite color pencils. She scanned them in super-high-resolution in many scribbles later and created Procreate brushes from the textures she scanned. 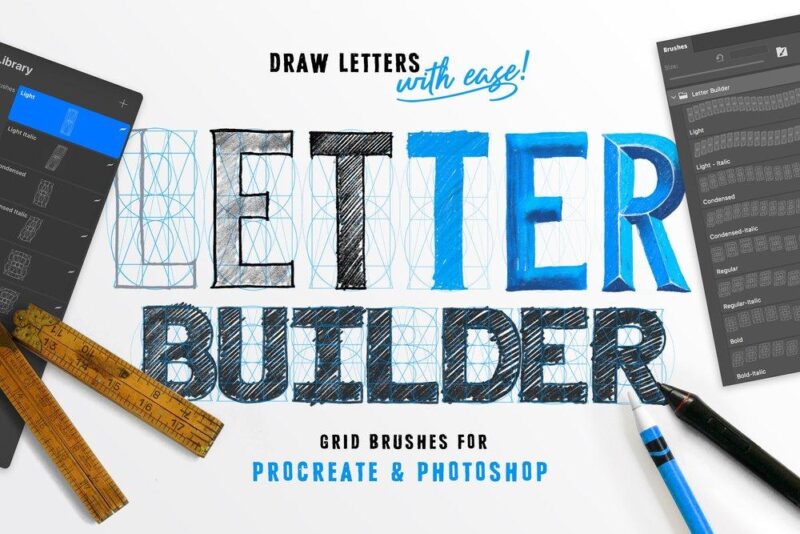 Ian Barnard has a unique creative process in creating his Builder Bundle. When creating products, he usually finds inspirations on Pinterest or other media, then reverse-engines the effect in that artwork. With this method, he then creates a product from the artwork that is used.

His other method is by asking his lettering audience what their pain points and struggles in designing are. Then he will try to address it by creating a product to make their workflow easier.

In creating the Builder Bundle, he found out that the biggest struggle people have in lettering was layout composing and consistent letterforms. Then, together with his lettering friend, Stefan Kunz, they developed design assets to solve the challenges and make the design process simpler and easier. 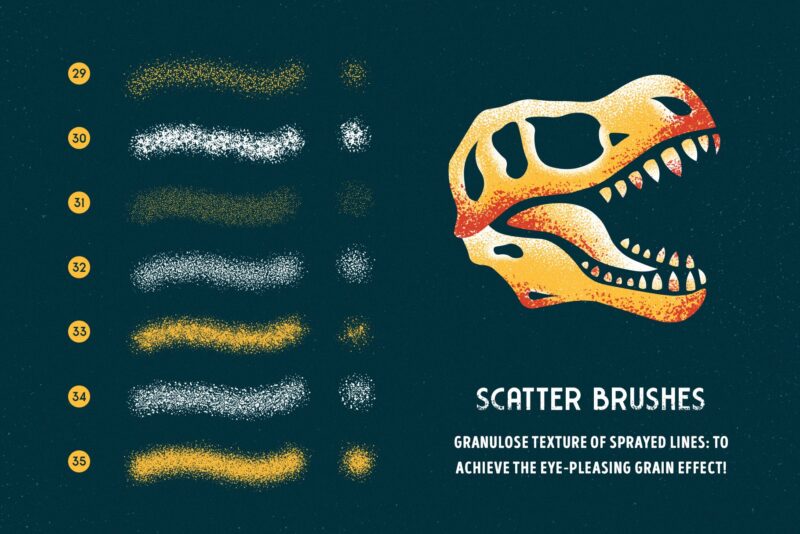 Ksenia from Pixelbuddha, realizes that any illustrations, no matter how they are made, can be upgraded with a few strokes. That is what inspired them to create versatile shader brushes. This type of brush allows for both subtle transitions or a more distinctive one. With the use of this brush, designers can also perform various focal editing such as highlighting and deepening the color.

Anna Tikhomirova, a talented designer of Pixelbuddha, then create a collection of simple illustrations. It shows that well-picked tools can be used to create stunning artwork. In fact, with the right tool, you don’t have to have a ton of experience to create a beautiful design. 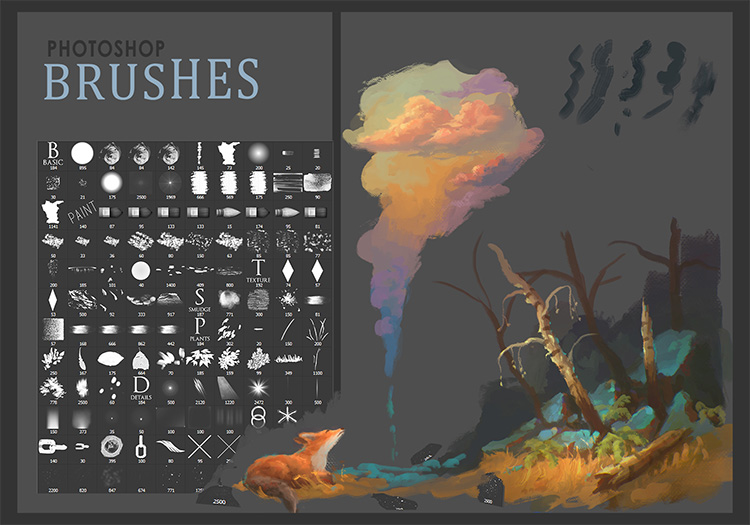 This tool contains six brush packs that are available for Procreate. Previously. Alaina Jansen works focus a lot more on creating add-ons for Adobe. However, as she was slowly getting to know Procreate and was amazed by its capabilities, she was interested in making brushes for Procreate.

In creating the brushes, she was inspired by realistic texture, which was her guide in creating them. By making these brushes, people of all budgets and skill levels can create artworks with realistic effects or playing around with lettering techniques.

Each pack was created based on a problem or pain points that she wanted to address or simply because she wanted to explore its design process. The idea was because she thought that digital artwork could look very flat and cartoony. Therefore, she wanted to provide the tools to create more realistic art. 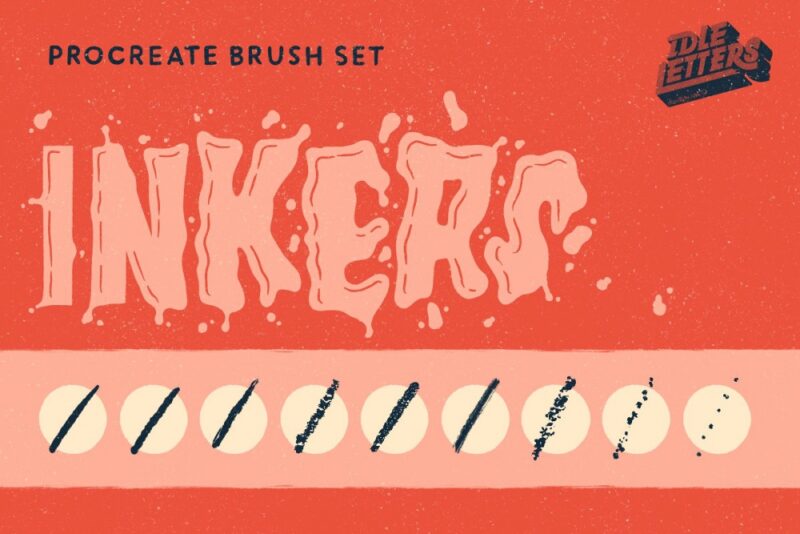 One of the most powerful inspirations is when you see and experience the world, then put them into your digital format work. Los Ives from Idle Letters believes it, which pushed him to create this Inkers Procreate Brush Set.

His artworks are textured and filled with messy lines, which become the basis of his inspiration to make the brush. He loves to look for textures from the world around him and then manipulate them so that he can use them for his brushes.

He used his products as design assets for his projects, making them get the solid testing they needed. Every time he wants to release a brush set, he makes sure that the products always come from assets he makes for himself and has been using them for a long time. He explained that it is a more logical step and hoping that people will also love the brushes as much as how he loves to use them. 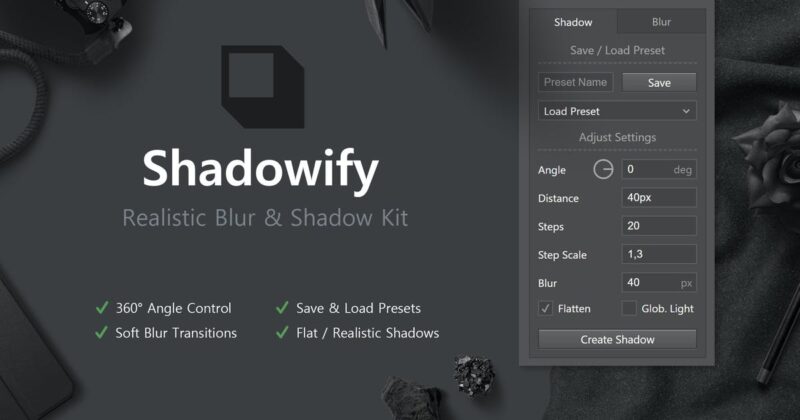 Designing is an iterative and repetitive process that can lead to a longer workflow and take a lot of time. Starting with the idea, test them, revise, optimize the artwork, and repeat. These processes are then repeated until the desired results are produced, taking a lot of time, effort, and resources.

Simon Henke from h3design wanted to optimize the workflows so that designers can work more effectively and productively. That is why Shadowify was created to reduce repetitive tasks and improve workflow, much like his other Photoshop extension.

Simon understands that designing is an explorative process to be able to get the desired results. Sometimes, experimenting is also a great way to boosts creativity, so working least efficiently is understandable. However, doing the specific steps over and over can make any designers feel like they are wasting their time.

He saw this as an opportunity to improve so that he and other designers can be free from repetitive tasks and focus more on the most enjoyable tasks in designing instead.

The inspiration to create Shadowify came when he was working on mockups and scene creators. In that work, he had to recreate shadows based on photographs. The process was combining multiple drops, shadows, or blur filters. This step can take a lot of time and is repetitive, so he created a panel to automate the steps. 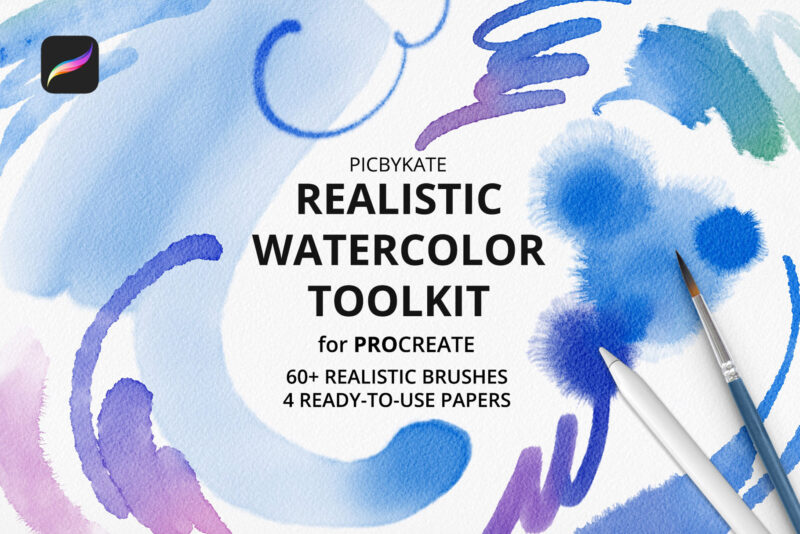 Passion for arts that is developed from a young age often persists in adulthood. Many people want to see if they can make a career out of their childhood passion. That is what inspired Kate from PicByKate to create design resources that help other designers easily create artworks.

Kate has always loved painting and start learning how to create a digital painting using Photoshop in school. Then she went to design school, where she drew a lot of visualization by hand using various tools such as watercolor, pencils, and gouaches. She

Her extensive experiences as a painter and designer lead her to create digital watercolor brushes for Procreate. Despite loving to paint using real paints, that is impossible under tight deadlines because she would have to redraw and fix mistakes repetitively. That Then she found a way to combine her digital and real painting skills.

With those experiences, she then created brushes that can imitate real paint materials such as gouaches, oils, and watercolor. With these brushes, designers will get the much-needed help to work faster and easier. 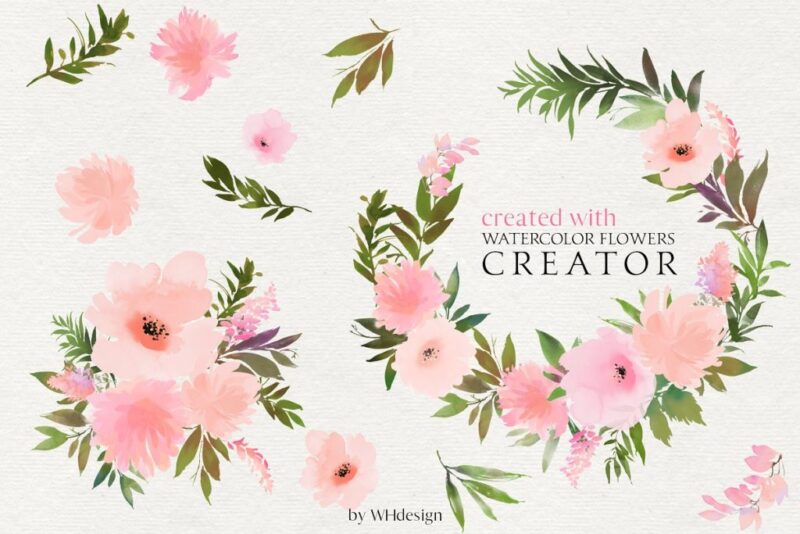 Sometimes, inspiration can also come from other peoples’ creativity. It is what Yulia Podlinnova experienced when she was creating the Watercolor Flowers Procreate Creator.

She was staring at her own Instagram video showing bleeding watercolors inside a flower that has just been painted. By that time, she had been using Procreate for a while and loved the features when she got the idea to create a tool that can help her create realistic watercolor flowers with a few simple clicks.

She wanted a tool that can paint realistic flowers, but it should not look flat or like stamped flowers. She wanted it to have color transitions, lights, shades, and even the bleeding watercolor effects. Therefore, after much thinking, painting, creating, and testing, her Watercolor Flower Procreate Creator was born.

Inspiration can come from anywhere and anything. The passion for designing and creating beautiful artworks pushes these designers to create powerful tools that are easy to use yet can help them produce stunning artwork. With these tools, designers will open up new possibilities to explore more techniques when drawing their artworks.